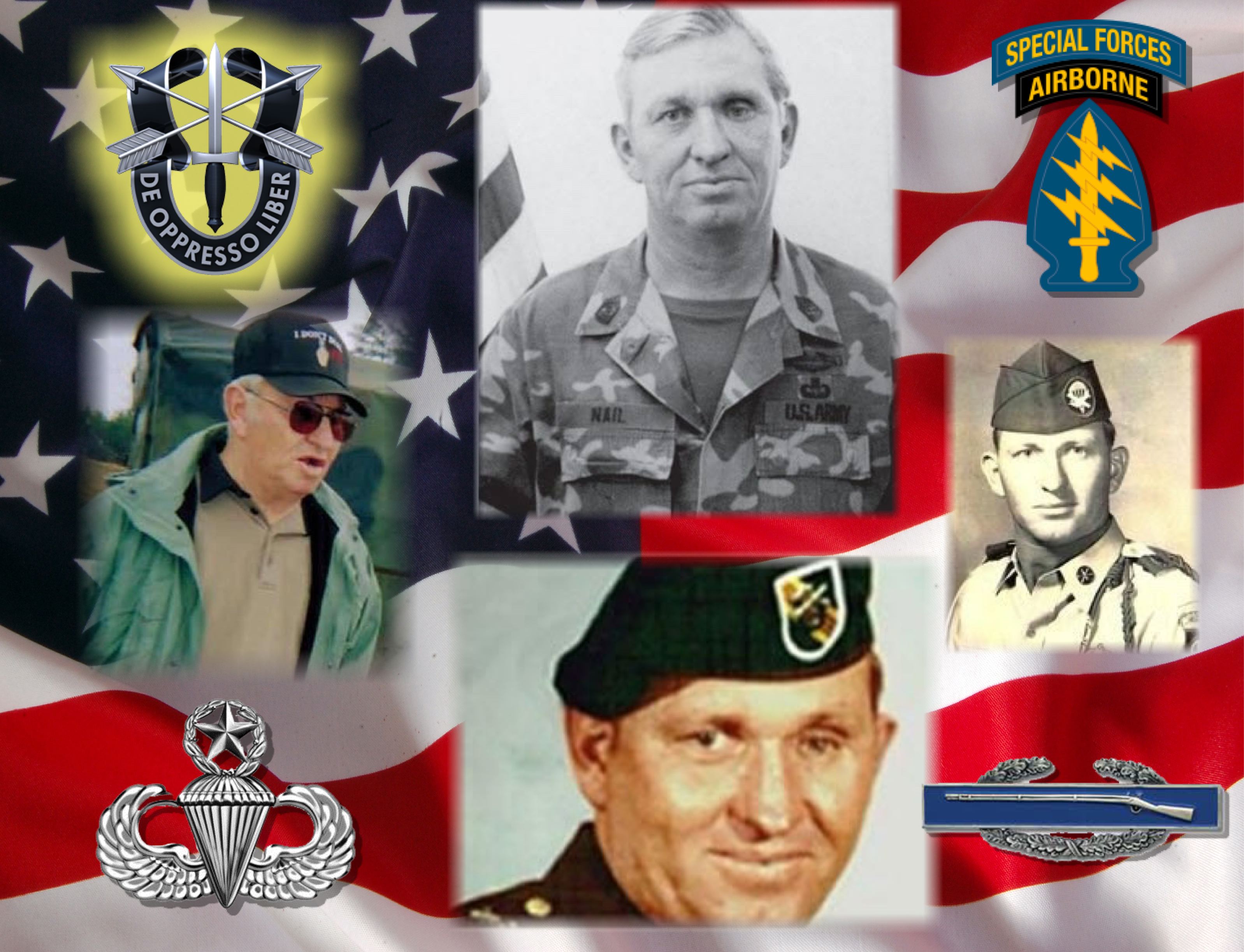 Richmond J. Nail, 85, of Fayetteville, passed away Thursday, September 10, 2020 at Autum Care of Fayetteville. Richmond was born May 3,1935 in Izard County, AR to the late Elsie (Barnes) and Richard Nail. He was preceded in death by his wife, Anne Nail.

SGM Richmond J. Nail spent over 50 years serving his nation, both in and out of uniform, leading and training airborne and Special Forces Soldiers. He was born May 3, 1935, in Batesville, Ark. In 1953, at age 18, SGM Nail enlisted for three years of airborne duty. As an enlisted artilleryman, he served in a number of capacities with the 11th Airborne Division in Germany. In 1956, he participated in combat operations in Beirut, Lebanon. In June 1966, while serving as an artillery NCO in the 101st Airborne Division in the Republic of Vietnam, he earned the first of many combat decorations, a Bronze Star with “V” Device.

In 1967, SGM Nail returned to Fort Bragg to begin his long, distinguished career as a Special Forces NCO. He completed the Special Forces Training Course as an 11F in 1967.

In 1969, he returned to the Republic of Vietnam as a member of a Mike Force Team B-55, 5th Special Forces Group (Airborne), a quick-reaction force composed of a few American advisors and Montagnard tribesmen. On March 17, 1969, while serving as a platoon leader with three other U.S. Soldiers and 200 tribesmen in the 5th Mobile Strike Force Battalion, he earned another Bronze Star during search-and-destroy operations against communist strongholds at Tuk Chup Knoll in the hills of central Vietnam. After being severely wounded during this operation, he went to Japan and then to Walter Reed Army Medical Center for an extended period of recovery for severe wounds that eventually claimed an eye and a kidney.

SGM Nail’s long relationship with the JFK Special Warfare Center began in 1969, when he was handpicked to perform duties as an instructor at Camp Mackall in Phase I of the Special Forces basic enlisted division. He served in this capacity until 1975. During that time, he personally wrote every lesson plan for Phase I training and set up a jungle lane and a RECONDO course.

In 1982, Lieutenant Colonel James “Nick” Rowe requested SGM Nail join him in standing up the Survival, Evasion, Resistance, and Escape (SERE) Course in the Special Forces School. SGM Nail joined LTC Rowe and lent his expertise to the SERE program. He tailored his Phase I lesson plans to create a SERE course that emphasized the knowledge of poisonous plants, ropes and knots, and infiltration and extraction techniques. He set up strenuous training enhancers that became the hallmark of the SERE Course: barriers, wires, a slide for life and the use of aggressor forces.

In June 2006, SGM Nail retired after 24 years of civilian service to the John F. Kennedy Special Warfare Center and School. He was married to the former Anne R. Reynolds of Summerville, Ga (deceased April 2019). They have one son, Todd.